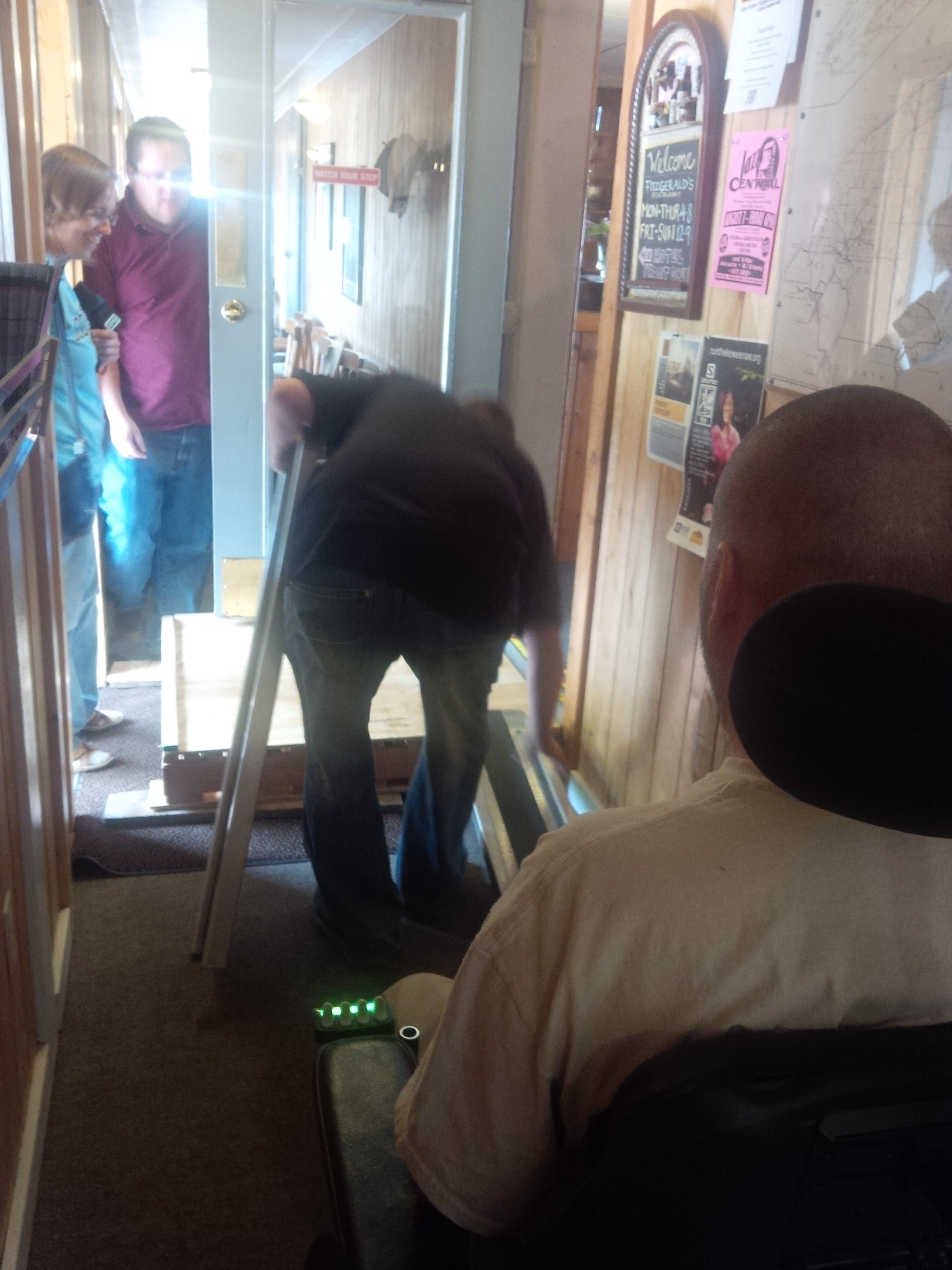 I thought my days of eating at The Fitz were over, but I keep finding creative ways to overcome obstacles. In this case, Kristin’s brothers, when they were up visiting from Texas, devised a platform system to get me over a step into the dining room of the 1957 beach-side inn and restaurant.

Kristin helped me into the building through the kitchen, while Steve and Nate set up the platform and ramps. I rolled up onto the plywood-topped pallet, carefully pivoted on the three-and-half-foot square deck, then drove into the dining room. It was worth the hassle for the best ribs in the Midwest.

I made it into Fitzgerald’s one more time, but I knew it may be my last. The pallet’s too heavy for Kristin to handle on her own. I took in the 180° view of Lake Superior with the sliver of Isle Royale 45 miles away on the horizon.

I savored every rib I could stuff into my stomach, which has shrunk — at least on the inside — to suit my reduced caloric requirements of being nearly motionless. The ribs I couldn’t eat I brought home for our almost-six-year-old Isaac. He was quite disappointed that he didn’t get to go.

A month later for Kristin’s birthday, we had yet another chance to go with the help of her parents. Lani helped me through the kitchen while Dave and Kristin set up the platform and ramps. Again, it was worth the hassle, and Isaac loved his bacon-wrapped filet mignon.

“When I grow up, we can take dad to The Fitz and won’t need anybody’s help,” Isaac said after dinner.

I delighted in his hope for the future, even though I knew how improbable it would be for me to eat at The Fitz when Isaac’s an adult. I’ll be eating from a feeding tube, if I’m even alive.

Isaac’s always thinking about me in his Lego designs and plans for the future. He builds Lego airplanes with accessible ramps. He plans to build a house with a basement, but with an elevator “so dad can visit.”

We’re honest with him and Sara about my health and what will happen to me. We talk of other pALS who’ve died, some shortly after diagnosis. They also know that some pALS live a long time, and that we don’t need to worry until breathing gets difficult.

In the first session, I described my overwhelming fear. The counselor explained worry affects us physically: “God hasn’t designed us to worry about the future, but to live in God’s grace for today.” … We aren’t designed to know the future, to have a probable life expectancy. In our case, modern medicine’s given us that. This disease isn’t like many others. With many other diseases, we’d have hope, at least in the beginning, that perhaps we could beat it. With ALS, there’s no treatment and no cure. We know how this is going to end. A hundred years ago, we wouldn’t have had this prognosis. Todd would have weak arms, but his probable future wouldn’t be mapped out. But we know his future, so we do need to plan as best we can—just not obsess about it.

I’d go a step further beyond saying we’re not designed to know the future. I’d say ignorance is a gift. God gave a gift of innocence to Adam and Eve, but they chose to disobey him and eat from the Tree of Knowledge of Good and Evil.

I don’t want to know too much. People asked if I’ve read Tuesdays with Morrie. No. I’m living it, so I don’t want to read it. Some find comfort in our book, Heavy, and I’m glad, but others like me prefer not to even think about it.

I’m focused on today. I’m five years into a disease that cuts most down quicker than they can adapt. I cherish every day and what I can do, such as help Kristin edit her second novel.

Yesterday, after our usual method of transferring me to the toilet failed, Kristin stuck out her chin and squeezed her eyes to hold back tears.

She laughed her sorrow out.

I couldn’t imagine what else she could’ve been upset about. I’m already living on borrowed time, and we had an opportunity yesterday to find another creative way to overcome an obstacle.