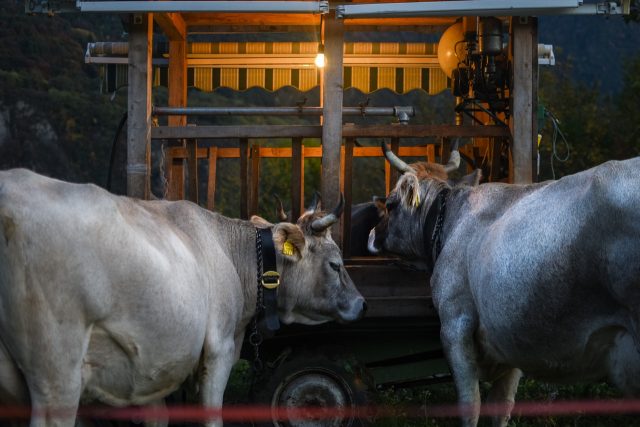 “It reminds me of the Russian farmer,” Kristin would say when things got better after being worse.

She doesn’t need to tell the story anymore of the poor Russian farmer who complained to his rabbi of his cottage being too small for his family. “Bring in the cow.” It was worse. “Bring in the sheep.” Worse yet. “Bring in the chickens.” Unbearable.

“Now take them out.”

Ahhh, relief. The cottage had plenty of room after all.

I gained perspective this week after my wheelchair died. As I was tilting back, the power went out on the chair. Kristin was gone, and my phone was in the other room. Fortunately, I was set up at my computer and managed to get a message sent to a friend who got email on his phone: “Help!” He came and jiggled a wire. The chair worked again, but I dared not tilt back. Just in case, I had him bring in my old wheelchair—the one I used when I still could walk a bit and transfer to other chairs—from the cold garage to thaw and charge the battery.

I was a day and half without tilt—my rump was sore; my hips ached. Could you imagine sitting in a car for a day and half and not being able to change positions?

Our durable equipment provider came and diagnosed the problem. “New wires are on the way. I should be able to get them installed within a couple weeks.” In the meantime, he jury rigged the old wire and said it was fine if I use the tilt function. I was still nervous to do so because I saw how little wire he had to work with to splice the loose connection together. Later that night, just as Kristin was getting me ready to put the sling on me and transfer me into bed, the chair went dead.

I still had my old wheelchair, and, honestly, that’s all some people have—a basic wheelchair without tilt and recline, without a fancy Roho air cushion, without thigh blocks to keep my legs from splaying off the sides of the chair, without comfortable armrests, without an ergonomic joystick.

Did I mention the dread?

“Look,” Kristin said, holding the loose end of a cable that had come unplugged. “Where does this go?” She found were it plugged in, connected the wire, and then the chair powered up.

“It reminds me of the Russian farmer,” I said.

Daniel J. Vance tells stories of inspiring people with disabilities. He has a Facebook page and his columns are featured in newspapers throughout the country. I was honored to be interviewed by him last week. I hope you check out his Facebook page, Disabilities by Daniel J. Vance.

P.S. I had once wondered if Russians told stories of poor Americans. My dear, Russian friend Anna said, “Yes, my mother used to say, ‘Finish your plate. There are starving children in America.’”