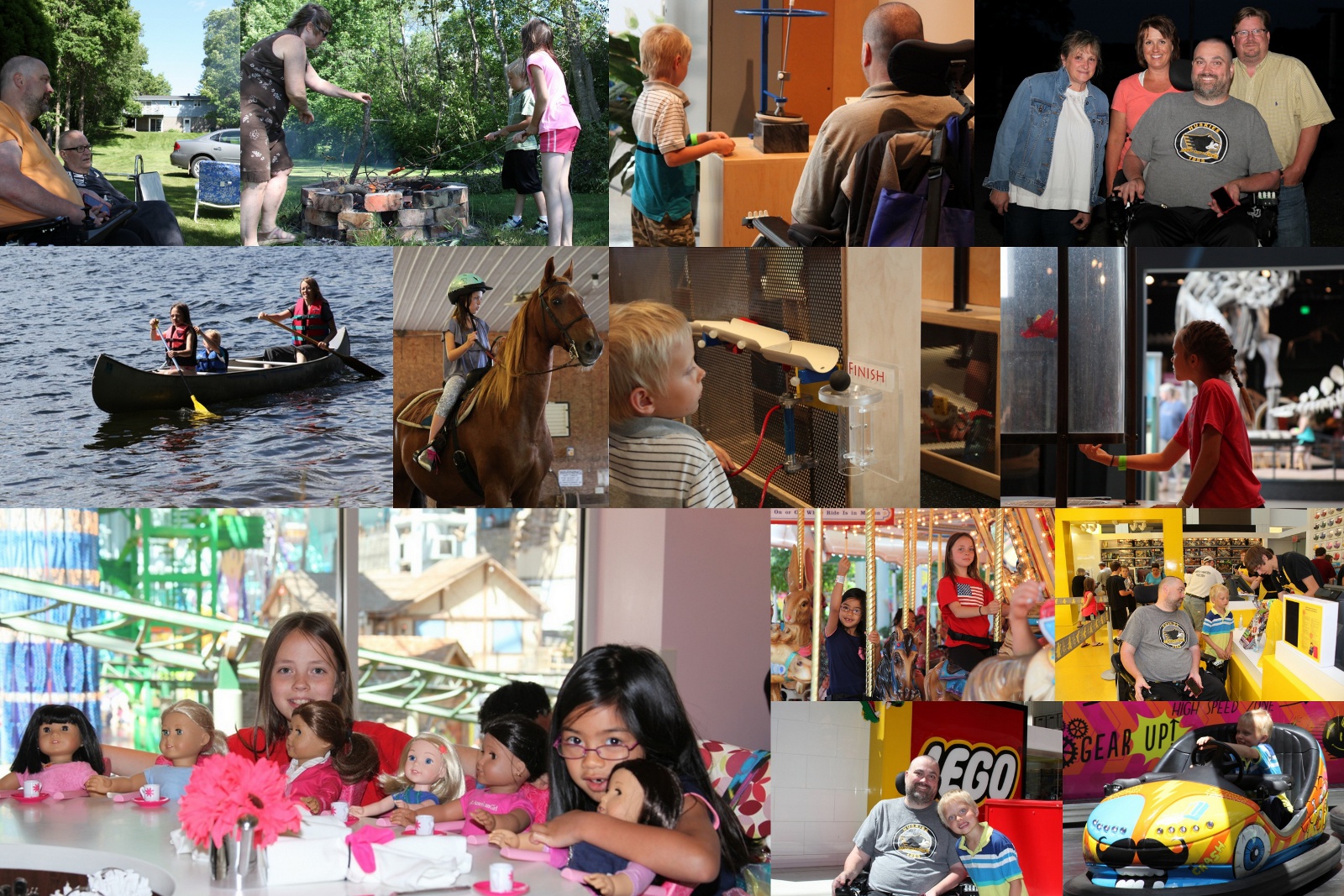 Fourteen years ago, when Todd and I had just started dating, we drove to the UP with friends to go kayaking. The day ended up being cold and rainy but we carried on, and all five members of our group completed the skills checklist including the wet exit where we flipped our kayaks upside down while strapped in, released the skirts, and got back into the kayaks from the water. Even in wetsuits, we were miserably cold, yet there was satisfaction in persevering.

I know people who take their babies camping, even in the rain. Some couples take their young children on 30-mile hikes. We, however, gravitated toward cushy accommodations—a downtown Chicago hotel, our friends’ Bel Air home, a water park.

Families facing ALS grieve the loss of dreams. Some are large. Some are small. Many of us feel sadness when we see other families’ vacation pictures. We wish we could take those trips with our kids, but most destinations are physically impossible. Travel with severe disability is too difficult.

Last year we made the four-hour trek to Duluth for Todd’s ALS clinic. We had a large room at the Sheraton with an accessible bathroom and a Hoyer lift provided by the hospital. It went pretty well, so this year we made the same trip plus tacked on a three-hour excursion south to Minneapolis to give the kids family vacation memories and visit extended family. And Todd had a chance to catch up with old friends.

Todd’s gradual but continual decline made travel more difficult this year. After letting the kids swim late the first night, we spent an hour in the bathroom wrestling with the lift and sling. Our frustrations boiled over. Eventually, I got Todd into bed, but his feet dangled off the end and he felt suffocated on the soft bed that prevented even the smallest movements. Though he was exhausted, he sucked it up and lay awake most of the night.

The next day at clinic, his blood pressure was elevated. His feet were swollen, and his joints were in pain. (By the way, his breathing is down another 4 points, but still not to the intervention stage.)

Todd dreaded the thought of getting back into that bed, so we ventured out to Trailfitters and purchased camping mattresses. He slept on the floor that night, which worked better, except the Hoyer is not designed to lift somebody off the floor. It was hard on his toes, as I tried to maneuver the clunky device over him to lift him onto his chair.

After his appointment, we had a nice dinner, and then drove up to Todd’s parents the next day where we spent the evening at the lake. The kids swam, and we roasted hot dogs and marshmallows over a bonfire. From there we went to Minneapolis — Mall of America, Auntie’s horse ranch, and the Minnesota Science Museum. Life almost felt normal there for a few hours when Todd wheeled off with Sara to explore exhibits while Isaac and I spent an hour building a ball run with pistons.

Our family sat together (yeah for accessibility) and watched an Imax movie. We experienced the National Parks through the eyes of mountain climbers. And that reminded me. Some people push themselves to their physical limits for fun.

We spent a week in nice hotels, but at this stage of ALS, we were roughing it. It felt as rigorous as kayaking in cold rain.

“There were more peaks than valleys,” he said.

I’m glad we did it—Take that, ALS!—but I don’t know if we’ll ever leave home again.