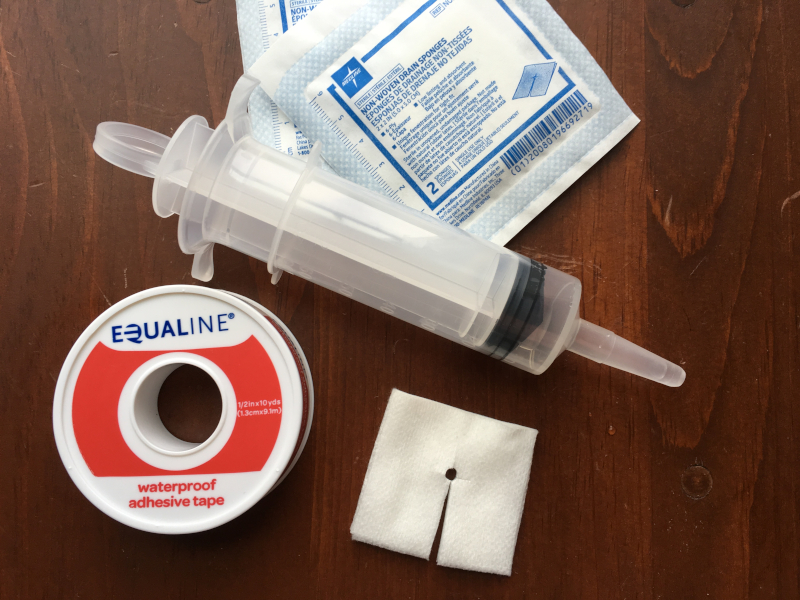 [This article was written for ALS News Today prior to Todd’s surgery to insert a PEG tube on August 12, 2019. Keep reading after the article for a follow-up by Todd.]

I love learning some new skills, but not all of them.

Thirteen years ago, I took a creative writing class that set me off on a journey that has included three novels, a children’s book, and now a weekly column. This week, I hope to take a puppet class.

I’m also learning how to manage a feeding tube this week. It’s a skill I wish I didn’t need.

One of the hardest things about caring for someone with ALS is adapting to continual change. After we adjust to a new normal, my husband, Todd, has another setback and we need to figure out how to manage the next stage of the disease.

A few months after his diagnosis nine years ago, Todd enlisted me to shave his face. I still remember my apprehension as I picked up his razor and ran it over his cheeks, hoping I wouldn’t nick him. He didn’t ask me again. Then he grew his first beard. He ended up liking it, and it was easier for both of us.

Today, shaving him would be no big deal, but I was still reeling from the diagnosis at the time and it was overwhelming.

I’ve learned how to squeeze just the right amount of ketchup and mustard onto Todd’s hamburger.

I’ve learned how to pour water into his mouth at just the right pace so he can swallow pills.

I’ve learned to use the Hoyer lift to get him off the ground when he falls. (Remember to crisscross the leg straps so he doesn’t fall out.)

After we got his wheelchair and an accessible van, I learned how to secure him with Q’Straints.

After his arms became too weak to use the joystick, I learned how to drive his wheelchair while walking beside him. I figured out how to maneuver through doorways by reaching over his shoulder or walking backward in front of the chair.

As if all that wasn’t stressful enough, I had to learn to assist him in coughing. He told his physical therapist that he couldn’t quite clear his lungs, so she showed me where to press below his sternum.

“OK, I’ll try it. Tell me if I’m doing it right,” I said. Todd stacked his breath as I counted, “One, two, three.” Then I pressed as he exhaled.

After I got used to each task, they didn’t seem like a big deal. I remind myself of this because the future feels daunting.

This week feels daunting, as it’s time for him to get a feeding tube. I’ll need to learn how to flush it and, eventually, feed him through it.

Others who care for people with ALS tell me it isn’t hard to use the feeding tube. Todd’s shower aid has worked with many clients who’ve had them, and she says it’s easy.

After this surgical procedure, will I still be able to give him an assisted cough without hurting him? The surgeon thinks so.

Will it be painful for him to be transferred? Turned in bed?

I’m sure I’ll figure it out, but for now, it’s a big unknown. I’ve watched a few YouTube videos, but I won’t feel comfortable until I’ve had hands-on experience.

If all goes well with Todd’s surgery and recovery, I’ll go to the puppet class. Oh, how I wish that was the only new skill I’ll be learning this week.

My PEG tube surgery went well. We were at the hospital for three hours, but the actual procedure was only ten minutes, and the surgeon said it went flawlessly.

The anesthesiologist kept me breathing on my own during the procedure, increasing the chance that my lungs would continue to function after the surgery. The precaution was to use only a “twilight” dose of propofol, which meant that he needed to first de-sensitize my gag reflexes. That was a fairly dreadful process, but I’ve had worst gagging episodes at dentist appointments.

It took a week for me to recover, during which time I managed the pain with Tylenol and back sleeping. I can now be turned to sleep on my side — the caregiver just needs to make sure my hand doesn’t snag the tube. It doesn’t bother me otherwise, and there’s no pain. And we’ve been able to do assisted coughs with no issue.

We weren’t sent home with instructions, so it was confusing at first, but we figured out how to manage the feeding tube. It is not difficult.

We’re not using it for nutrition yet, so Kristin just cleans around the stoma, replaces the gauze, and flushes the tube out daily.

It’s been helpful to have the PEG tube. We can use it to relieve gas that I would otherwise have difficulty burping up. My nighttime caregivers can give me water if I’m thirsty, because it’s too difficult to get more than a sip from a straw when I’m lying on my back or side. We’ve used it to inject NyQuil after I was already in bed, and we used it to inject baking soda and water when I had indigestion.

My neurologist suggested I get the tube two years ago, but that seemed premature. The cost of waiting was that we needed to monitor my breathing more frequently. My forced vital capacity had finally declined to the point where now was the right time to have the surgery. All went well, so in retrospect I’m glad we waited.

However, we’ve heard stories of people waiting too long, and then the surgeon refused to do the surgery, or they did the surgery but recovery was too difficult. If my breathing had been declining anymore rapidly, I would not have waited — especially knowing how easy it is to have one.

My biggest irritation, honestly, is that my stomach’s a little itchy underneath the medical tape.