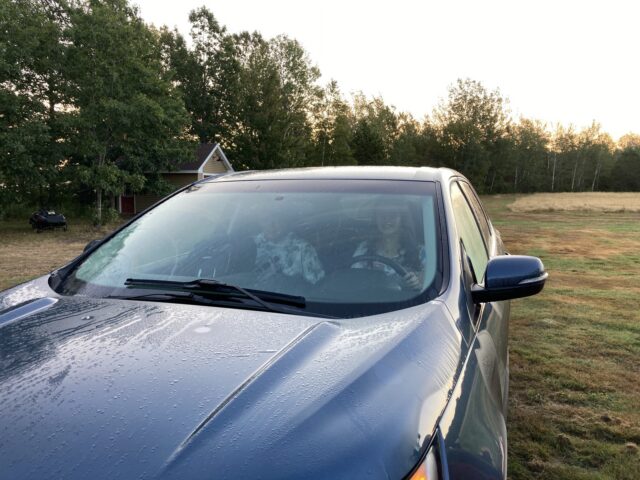 My husband, Todd, has ALS and is paralyzed, so not only do I cook all the meals, but I also feed him. His meals are often rushed or delayed because I’m running our daughter, Sara, to dance practice or wherever else a busy 16-year-old needs to go. There are times when it’s difficult to leave Todd at home alone, such as when I need to clear his lungs or he needs to use the bathroom, so we were looking forward to Sara getting her driver’s license.

Sara started the process last summer with classroom and behind-the-wheel instruction, and she passed the written exam last winter to get her driver’s permit. Before she was eligible to take the road test, she had to log many permitted driving hours, plus a few hours with me in the car, including at night. But she still had to learn how to parallel park.

Last week, Sara auditioned for a role in a musical at a community theater. If she gets the part, rehearsals would add another activity to her busy schedule, and this taxi mom would be driving even more. It would make things much easier if she could get herself to the rehearsals, so I contacted our local road test examiner to get her on the schedule.

I thought there would be a wait, but the examiner texted me back: “Road Tests on Thursday, 9-4.” I scheduled Sara for two days later, at noon. Nothing like a little pressure to light a fire.

Because we are on the far western side of the Eastern time zone in Upper Michigan, daylight extends past 10 p.m. So once it was finally dark, just before Todd’s nighttime caregiver arrived, Sara and I went for a drive to log some nighttime hours. We went to a local school to practice parking. To pass the Michigan parking test, Sara had to pull up to a line, back into a space, and then parallel park. It was clear Sara had more work to do, so the next day we set up garbage cans and laundry baskets in our driveway to mark the spaces she would need to pull into.

Todd suggested that I angle our security camera so he could watch her practice and offer feedback. She performed the maneuvers again and again, knocking over trashcans and setting them back up. At one point, Todd called her to suggest she try utilizing her side mirrors to back into the spot. That helped a lot. After seeing her struggle with parallel parking, he called again to offer encouragement. He found and shared a video explaining how the test was scored, and suggested she not worry about hitting a few cones. She was allowed to knock over some and still pass.

On Thursday morning, Todd’s shower aide arrived, so before Sara’s test, she and I drove to town to practice left turns at green lights with oncoming traffic. My mom then met us in town to accompany Sara during her test so that I could go home to help Todd in the bathroom and feed him lunch.

Sara passed the test, and we are pleased to have another licensed driver in the house. It is a big step for Sara on her road to independence, and for Todd and me, it is one of those rare occurrences when managing life with ALS will get a little bit easier.

Appreciating the Small Victories While Living With ALS