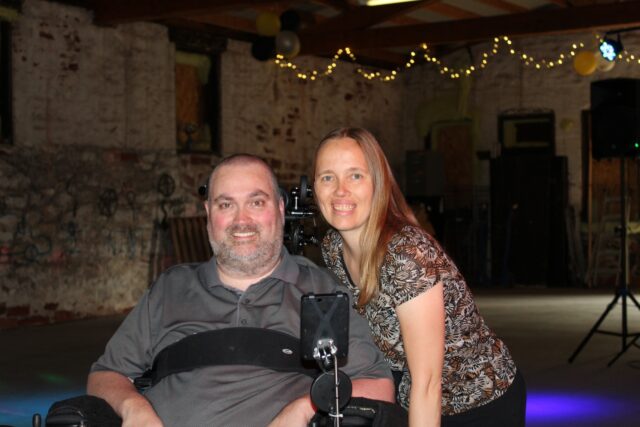 My husband, Todd, and I marked 18 years of marriage on Tuesday. The memory of our seventh anniversary is seared into my mind. He bought me flowers from a Mayo Clinic gift shop.

We were in Rochester, Minnesota, getting a second opinion on his ALS diagnosis. After a battery of tests and examinations by a few different Mayo Clinic doctors, they confirmed that the weakness in Todd’s right arm was indeed due to ALS.

At the time, we had no idea how the disease would progress, and we thought that anniversary might be our last one together. Todd is still with us, but his health continued to decline, and our marriage has gone through different phases along with the disease.

After the diagnosis, we were in get-our-affairs-in-order mode as we prepared for Todd’s inevitable disabilities. It breathed life into our marriage when we found a new dream together — building an accessible home near my family. We put our house on the market, and we poured over architectural design books and worked on house plans. When our house finally sold two years later, we were able to see our accessible home take shape, and we began a new life in the home we had designed.

Over the next few years, I began writing novels as a creative outlet, something I could do at home while taking care of Todd as he gradually became paralyzed. He was my brainstorming partner and in-house editor. He typeset my books and designed the covers using his HeadMouse. We also published a memoir about our first year with ALS, and we recorded an audiobook of it so I’ll always have Todd’s voice. And we started a YouTube channel about things we have learned during a decade living with the disease. We expanded our world from home. We were partners in creativity.

When months with ALS turned into years, and years crested into the next decade, daily life became difficult. We still make an occasional video, but some of our drive to create new things has waned. In this season, one area where I feel very connected to Todd is in parenting our children.

My almost 12-year-old son not infrequently tells me, “You are overprotective of me.”

If his dad tells him, “No, that’s crazy,” then I know I’m not being unreasonable. I’m thankful to have Todd to give input when I might be overly cautious, and Isaac’s glad he can get a body board.

Last weekend, our 15-year-old daughter needed to learn how to parallel park for her driving school. I set up trash cans in our driveway, and Todd watched from the garage and coached her over his phone.

While living with ALS for over a decade, I’ve realized that I need to find energizing activities to counteract the chronic stress. I take a walk almost daily, drinking in the beauty of nature. When Todd has an aide or therapist with him, my son and I head out for a quick mountain bike ride.

I need these mini-breaks, but I’ve also found that if all of my recharging is without Todd, I don’t feel as close to him. Last year, we’d go to the beach and watch our kids on the shoreline. Even that has been too difficult for Todd this summer with weakened lungs and the high temperatures and humidity. So much of our relationship is me taking care of him. If I want to feel like more than his nurse, we need to connect, even if it’s just watching a movie together.

This week, I celebrate our life together and the resilience of our marriage. A love that has endured what we have been through is a pretty amazing thing.

This article originally appeared in ALS News Today: Celebrating a Marriage That Has Adapted to the Various Phases of ALS.