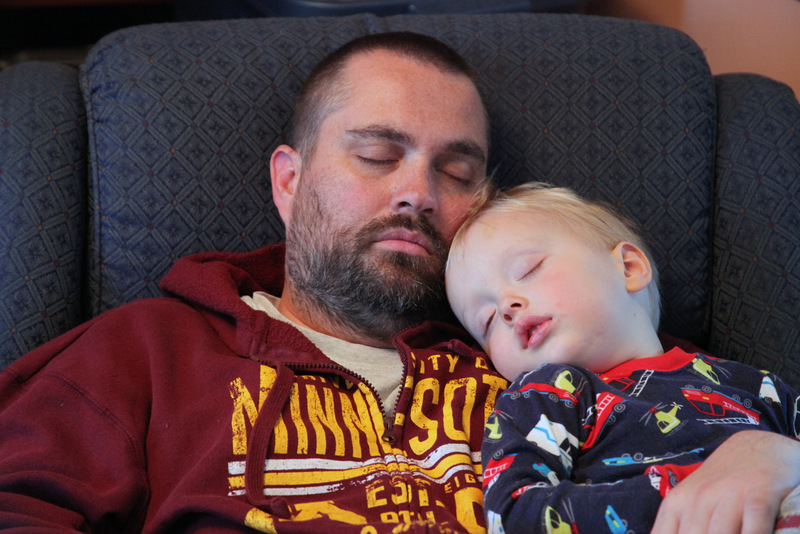 My faith is shaken when I’m sleep-deprived.

Immobile in bed, Todd’s joints ache, and he calls me to turn him. I wake in the middle of a sleep cycle, and he goes back to sleep, but my brain is in a fog the next day.

Are you there God? What are you doing? I thought You were supposed to supply our needs. I have a basic need for sleep and I am not getting it.

I plead with God for healing, a cure for ALS, or if not that, then at least sleep—for both of us. We’ve tried different mattress overlays and he even took a $37,000 turning bed for a test drive one night. Nothing works to get him comfortable, and we have concluded there is no solution other than turning him a couple times each night.

Todd’s ALS is progressing slowly, and for that we are thankful. But now we are in the long-haul of managing caregiving for a quadriplegic.

Over the last year and a half, I’ve become increasingly sleep-deprived due to being up at night turning him in his bed. I’ve felt as though my faith is eroding, and I’m often overwhelmed by the suffering and pain in the world.

The morning of March 22, I had just returned from dropping the kids off at school when the phone rang. It was my mom. She had been awakened by the police who told her my dad had been found unresponsive in his truck.

I prayed, “Jesus, Jesus, Jesus, help us, Jesus,” as I dressed Todd and lifted him out of bed with the sling and hoist. We rushed to the hospital and arrived just as my mom was being escorted to the room where my dad’s body lay.

As the three of us sat in tears, I said, “The tomb is empty.” Because of Christ’s death and resurrection, we believe my dad is healed and with Jesus.

I had a sense of relief, even as I am often filled with doubt, that there, in that moment, I still had faith.

But faith in a Risen Savior.

My faith is reborn as I think about my dad’s life. At his funeral, we chose for the Scripture reading 1 John 3:16-18. “This is how we know what love is: Jesus Christ laid down his life for us. And we ought to lay down our lives for our brothers. If anyone has material possessions and sees his brother in need but has no pity on him, how can the love of God be in him? Dear children, let us not love with words or tongue but with actions and in truth.”

My dad loved with actions and in truth.

Every spring he traveled to Reynosa, Mexico, ministering to the people in the Colonias. He took kids who visited from the inner-city fishing and boating. He drove to Canada to buy a used range-of-motion machine and spent months refurbishing it so Todd could use it in his wheelchair. When I went on a grain-free diet, my dad found recipes online and baked Paleo bread, birthday cakes, and pizza for me. He was a man who chose to serve—to be the hands and feet of Christ to those he came in contact with.

When I reflect on my dad’s life I see the answer to my faith-crisis questions. God works through people like my dad. He wasn’t flashy. He was a down-to-earth guy who just kept loving people.

That’s how I want to live too. As I serve Todd and my kids, I want God’s love to be made complete in me.

And there are many others who are the hands and feet of Christ to us as we face ALS.

Since then, Todd has recognized what a difference sleep makes for me. For the last couple of weeks he has tried to tough it out most nights, which means he lies awake for hours at a time, uncomfortable because he is unable to turn. He’s in a fog the next day.

This is what it’s come down to. Either he sleeps or I sleep.

The time has come for us to have more help at night so we can both get some solid rest. On a few nights, we’ve hired a home health caregiver from an agency to come from 10 p.m. to 7 a.m. We’ve been pleased with the nursing students the agency sends.

As we’ve shared our sleeping difficulties with a few friends, God’s people have responded with action. Some have given us money—it costs $180 to hire a professional caregiver for a night. Ten-thousand dollars would cover one night a week for a year. A friend has said she’d like to organize an effort to raise funds for caregiving help, and a retired nurse volunteered to take an occasional over-night shift.

Also, we are exploring building an addition off Todd’s bedroom so we would have a room for volunteer and paid caregivers to be within earshot of him. Several people have offered to help us build the addition.

God’s love is working through his people.

Stay tuned for details about our caregiving fundraiser and our building project.