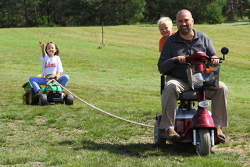 Todd and I sat with the kids at the kitchen table as they finished their bedtime snack. “Go get your pajamas on and get ready for bed,” I told Sara and Isaac.

“Mommy, hold me.” My tired four year old sighed and reached up for a hug.

“I want you to hold me too.” Sara looked in dismay at my full lap. Lately, she has felt a little jealous of the attention Isaac gets—at his birthday party, when we go to town and people comment on his cute fireman outfit but don’t acknowledge her, when he gets to make egg carton caterpillars for homeschool while she needs to do math and writing.  It’s not easy to be seven.

“Now, wrap one of my arms around you,” Todd told Sara. “Now the other one,” he said.  “Now squeeze my arms together.”

Sara squeezed her Daddy’s arms around her and smiled.

“Sara, do you know how much I love you?” Todd asked.

“All the way to the moon and back.” She waited expectantly for the next question.

“Is there anything you can do to make me love you more?”

“Is there anything you can do to make me love you less?”

“Yes. I mean ‘no.’ I was thinking of the last question.” Sara laughed in anticipation.

“Is there anything you can do to get a big tummy.”

“Eat too much!” Sara exclaimed.

Todd gives assisted hugs now, but he still has his sense of humor and is passing it along to the kids.

Earlier this summer we drove along the bumpy back roads to the state park.

“Mom, how do people live on such bumpy roads?!” Sara asked as we bounced along. “I’m glad our road isn’t so bumpy.”

“Me too. But if we lived on a bumpy road, we’d adjust to it.  People adjust to things and then it seems normal to them.”

“You mean like I adjusted to moving from Racine.”

“Exactly, and we had to adjust to Daddy having ALS.”

“That wasn’t a hard adjustment for me,” she said.

When Sara was four we told her that Daddy had ALS, that his arms were weak and that his legs were getting weak, that the doctors didn’t have any medicine to make them better.  But four year olds don’t have much of a concept of time so we didn’t talk about life expectancy.  Todd’s ALS was slow progressing and he wasn’t going to die tomorrow.

Now that Sara is seven and a half, we felt that it was time to share more information, especially because Todd is going to preach at church on October 20. He is going to talk about God’s purpose in suffering and share our story. He will talk about the diagnosis and the shock one feels when he is told that he a disease with a 3 to 5 year life expectancy. We didn’t want Sara to be surprised by something she heard from the pulpit or from one of her church friends.

So we had the dreaded conversation with Sara, both of us sitting in her bedroom while Isaac watched a movie in the living room. We told her that a lot of people with ALS only live for a few years, but some live longer, like 10 or 14 years.  We said that Daddy probably won’t live as long as Grandma and Grandpa but we don’t know how long, that Daddy’s breathing is still strong so we don’t need to worry about it today.  Sara didn’t seem too upset but she said the conversation was awkward.

The hard thing about this bumpy road we now live on is that it keeps getting bumpier.  Daily life is getting more difficult for Todd and for me as his caregiver.  He needs help now with simple tasks and has given up driving and with that a lot of independence.

We attended an ALS clinic in Duluth at the end of September.  Todd’s vital force capacity (a breathing measurement) is still strong at 90%. He started at 104% so it has declined about 5% each year.  70% is where breathing assistance comes into play. 40% is where you can get hospice care. ALS usually progresses at a steady rate, so we are optimistic that Todd will outlive our first neurologist’s prognosis of 5 years and we continue to pray for a miracle, and for a cure for all those with this disease. We covet your prayers as this is a difficult journey physically and emotionally.